Historical Past of the Standish Historical Depot and Welcome Center

Architecture of the Standish Depot

The Michigan Central Train Depot in Standish is one of only a small number of polished small-town depots in the Richardsonian Romanesque style standing in Michigan.

In 1988 the stone built depot was beginning to deteriorate and repair was needed when Robert and Karen Wiltse purchased and renovated it for their real estate business (CENTURY 21). Through their re-renovation efforts, they had the thought of preserving the outstanding depot of its original picturesque architecture as well as having it placed on the National Register of Historic Places on February 28th, 1991.

The former Michigan Central Train Depot in Standish Michigan is a picturesque, one-story fieldstone structure of Richardsonian Romanesque inspiration. It has a high roof that terminates in a gable at one end and a hip at the other. On the front or eastern side a broad, central entrance porch is flanked on one side by the gabled end of the former freight room and on the other by a rounded, hip-roof extension of the old passenger waiting room.

The depot’s main entrance at the back of the porch leads into the former passenger waiting room which occupied most of the north two-thirds of the building. The small, square former ticket office occupies the west half of the southern part of the waiting room area. At the building’s south end is the former freight room. 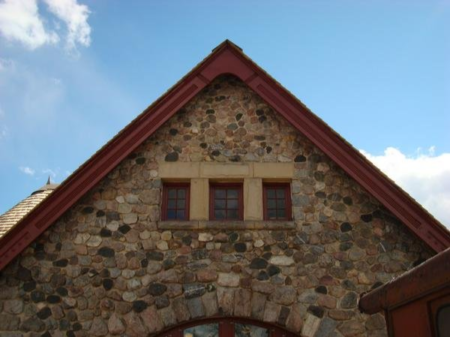 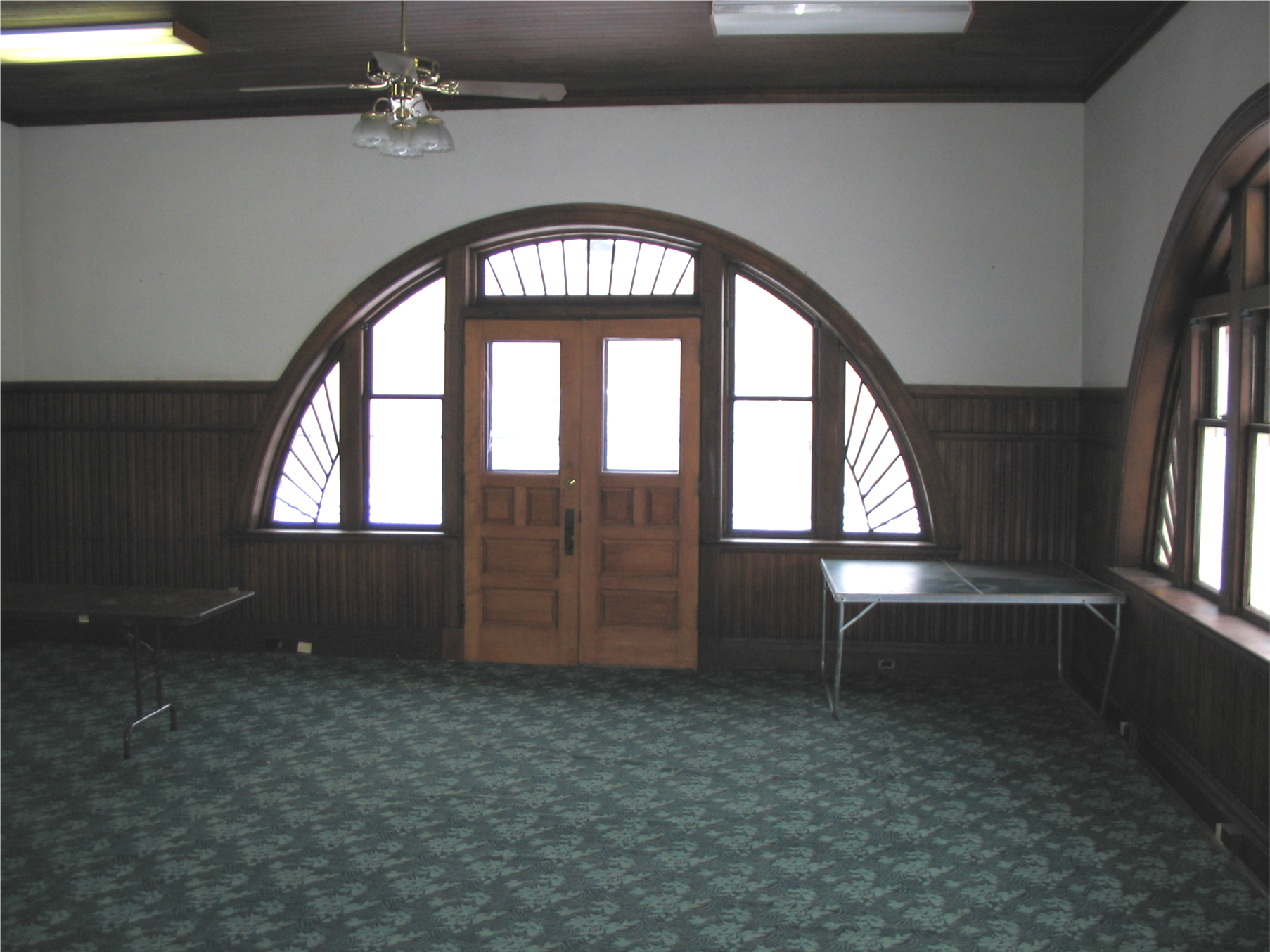 The Village of Standish was without a railroad until the early part of 1871 and was a product of the construction of the railroad line between West Bay City and Mackinaw.  Construction of the line began in May of 1870 by the Jackson, Lansing & Saginaw Railroad, which had completed a line from Jackson Michigan, north through Lansing, Owosso and Saginaw to west Bay City in 1867. Mr. Hugh MacDonald of Standish, and his team graded the first railroad grades through this area.  Founder John D. Standish permitted a right-of-way to the Jackson, Lansing, and Saginaw Railroad Co. to construct a railroad line north through Standish.  In September of 1871 the line was built through Standish, and only went as far north as Wells Station, just south of Alger.

It is known that the first train depot was built in 1871 or 1872 on the south side of W. Cedar Street on the east side of the railroad tracks.  The original depot was most likely a wooden, white pine structure, built in connection with the new railroad that had been authorized and laid in 1871.  By 1885 railroad business was growing dramatically, eight passenger trains ran through Standish daily. The wooden structure lasted until the late part of 1887 when deterioration became a problem.  In 1887 the Michigan Central Railroad informed the local residents of Standish that they would provide Stone Masons to build a new depot, if local farmers would haul in their large field stones for the exterior building material and foundation. The grounds for the new depot were cleared and graded by the Standish Business Men’s Association.

The Bay City Times circa 1888 expressed the opinion “the station “when finished” will be the finest depot on the line between Bay City and Mackinaw.”  In 1889 The Standish Train Depot was completed through the efforts of C. L. Judd of Saginaw, the Standish Bank, Stone Masons (provided by the MCRR), and area farmers who had donated the stones, the stone building was constructed to be an outstanding depot in the north.  The railroad was an essential part of the expansion of Standish, It gave way to rural and urban community development growth.  The line was completed to Mackinaw City at the Straits of Mackinac several years later and became the Michigan Centrals Mackinaw Division.

The last steam engine passenger coach to pull into the MC Standish Train Depot was on October 28, 1955. The automobile began to take over and in 1965 the railroad had discontinued all passenger service.  Glen Gray was the station agent in Standish from 1942 through 1947. Also as part of his official duties he was required by the government to deliver telegram messages to the families of service men who died serving the country during World War II.  Mike Kiley was the traveling freight agent at the Standish Depot from the early 1940’s to 1965 or 1966 when he retired. He used the telegraph to communicate with the trains using Morse code. Mike was the last person to work at the depot before it closed in the mid 1960’s. 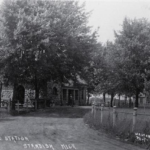 Historic Information of the Past

The original depot was built in 1871 (south of M-61) just after the Lansing, Jackson and Saginaw Railroad finished a new line north of Bay City to Wells. The City of Standish was platted around the railroad line, so the railroad was the key to the community’s growth and success.

The construction of the Standish Depot was a two year process. It began in 1887 and was completed by 1889. The depot suffered a fire sometime during the construction phase, there is no official record of a specific date.

A Bay City Times article from 1892 stated; “The MCRR have done much, and are continuing the good work, to make Standish the largest, liveliest, and best town on their road north of Bay City; and have spent more than $10,000 there in the past year, their stone passenger depot alone costing $5,000.”

In the late 1880’s into the 1900’s before television or radios, the volunteer band of about eighteen people would put on weekly concerts in the summer time at the Band Stand of the Standish Depot.

November 1, 1917: Another train wreck at Alger last night made a total of four near the same location in the past month.

During the First World War many flag poles were erected where none had been before. In 1918 the city erected a 62 foot flag pole in the Standish Depot Park.

August 26, 1920: The Standish Board of Commerce decided last night that the M. C. depot park will be beautified and kept in good condition.

In 1921 the Superintendent of Schools organized a group of boys to keep the Depot Park and cemeteries clean. This project only lasted for about six years, and both projects deteriorated from then on.

July 28, 1921: The schedule of the better sire and dairy train to be run by the Michigan Central in August shows two stops in Arenac County.

August 18, 1921: The D & M Railroad is building a new trestle bridge across the river at Au Gres and plans to extend the spur to Alabaster.

On February 22, 1922 Bay, Arenac and Ogemaw counties experienced about as bad a sleet storm as has ever been known. With all the ice damage, no serious accidents were reported. Train service was discontinued for three days.

November 19, 1924: The D&M railroad set a new record for the Bay City to Alpena run. The train averaged better than 48 miles per hour.

July 29, 1925: One thousand soldiers will detrain at Sterling on August 5th… the soldiers will train along the Rifle River north of Sterling.

September 8, 1926: Work on the MCRR Depot Park in Standish recalls the construction of the Depot 38 years ago. (1888) Through the efforts of C. L. Judd of Saginaw, the Standish Bank and area farmers, the stone building was constructed to be an outstanding depot in the north. The attractive park was also part of the original plan.

In 1927 the Depot Park began to diminish and deteriorate due to the lack of up keep.

In 1929 this passenger business fell off as fast as it grew and there were only four passenger trains daily through town.

In 1935 truckload after truckload of 30 inch metal pipe came into town by freight to be moved to other locations by trucks. This was for the oil pipeline that was going to be built from Alberta Canada to Port Huron Michigan. It runs nearly the full length of Michigan.

Douglas Honey worked for the N.Y.C. Railroad and became a telegrapher and station agent. In 1936 our local station agent Douglas Honey reported that from June 1935 through June 1936 the railroad brought in 339 cars of gasoline into Standish. Those were the days when all urgent messages went by Western Union (telegraph). If necessary, money could be sent by telegraph also. Douglas worked in the local depot until his retirement.

In 1941 the N.Y.C. Railroad layed heavier rails on their main lines in hopes that they could carry heavier loads, but the loads were not there to haul as the truck lines were already hauling them.

In the 1940s the Fletcher Oil Company built a gas station in front of the Depot, bringing the number of gas stations along “Gasoline Alley” now US-23 to seventeen.

By 1955 many of the depots were sold and moved away from the railroad property. Some were used as barns and others were to become homes or business places.

Robert and Karen Wiltse had the Standish Depot placed on the National Register of Historic Places on February 28, 1991.

On February 17, 1992 the D&M Railroad was sold to the Huron Acquisition Co. becoming the Lake State Railway Company (L.S.R.C.) Excellence In Transportation.

The Authority hosted their first annual Depot Days Festival on October 1st and 2nd of 2005 at the Standish Depot.

Saturday, October 1, 2005: The 1225 Pere Marquette Michigan Steam Engine and restored passenger cars from the Blue Water Chapter pulled into the Standish Depot. It was the first steam engine to arrive in 50 years for the passenger excursion to Grayling and back.

A dedication and ribbon cutting ceremony was held for the restored Standish Depot on July 24, 2007 by the Michigan Department of Transportation (MDOT).

The Standish Historical Depot Welcome Center officially opened their doors to the public on October 1, 2007.

DATED EVENTS WILL BE UPDATED WHEN POSSIBLE

Formerly the old M.C.R.R. Standish Michigan Train Depot now named the Standish Historical Depot Welcome Center, it was restored back to its original architecture beginning in 2004 and was finished by 2007.

It is now one of the newest “Welcome Centers” to Standish & Northeast Michigan open daily. The historic depot stands on its original fieldstone foundation and faces east towards Standish’s Main Street (US-23). The buildings architecture is referred to as Richardsonian Romanesque.

It was quoted to be “when finished” the finest depot on the line between Bay City and Mackinaw” in the Bay City Times circa 1888.

The Standish Historical Depot Welcome Center was once the central hub of our community well into its century and would like to become that again.

The preservation of the cities oldest landmark (as of 2009 it stands to be 120 years old) is important to try and help strengthen the economic growth and stability to Standish Michigan. 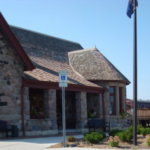 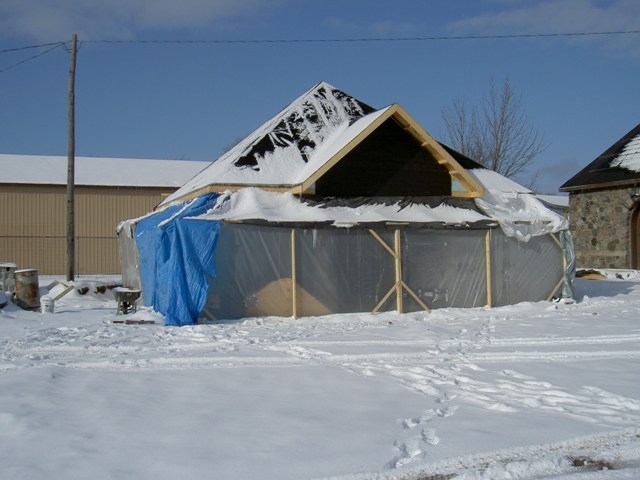 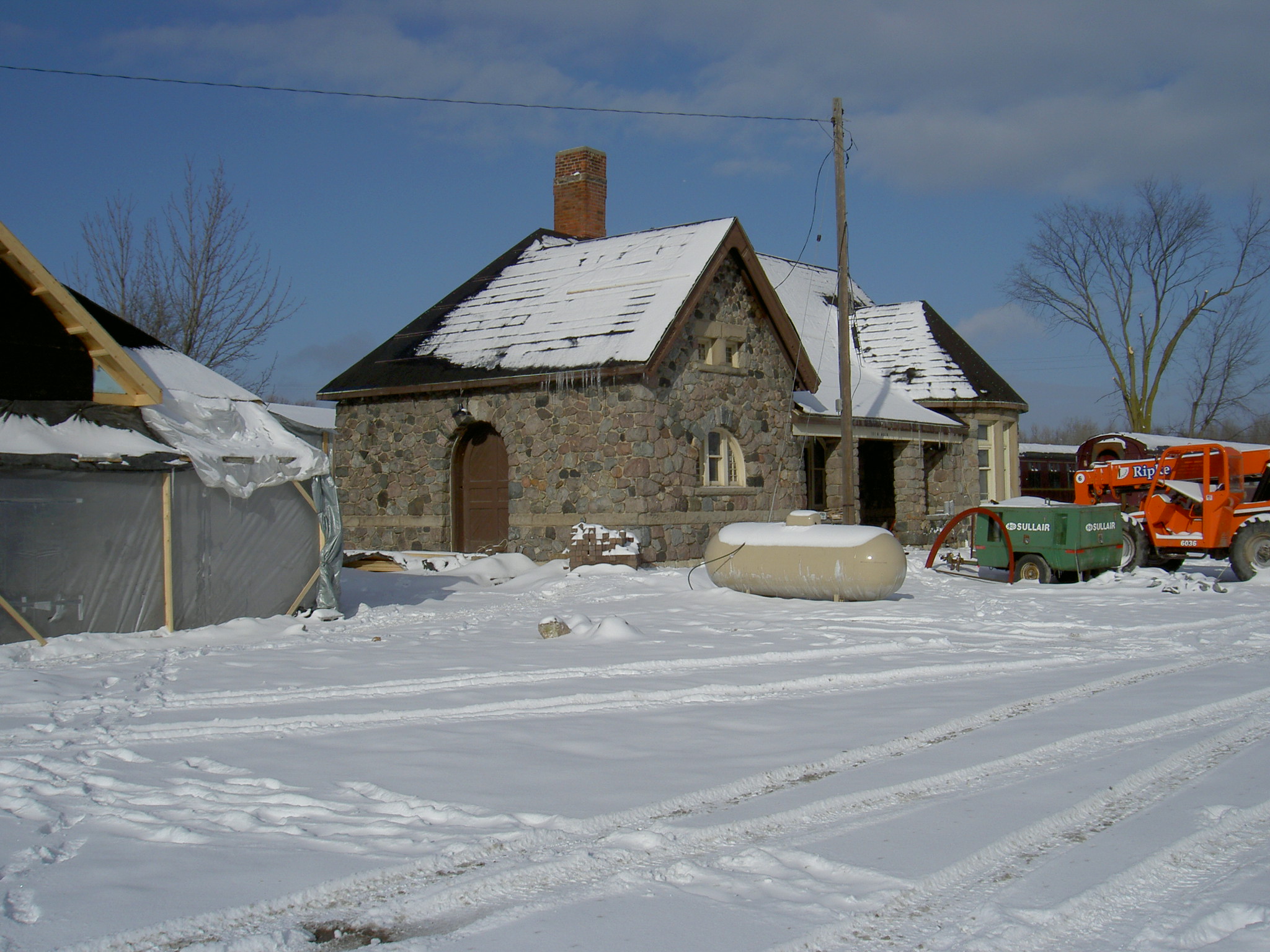 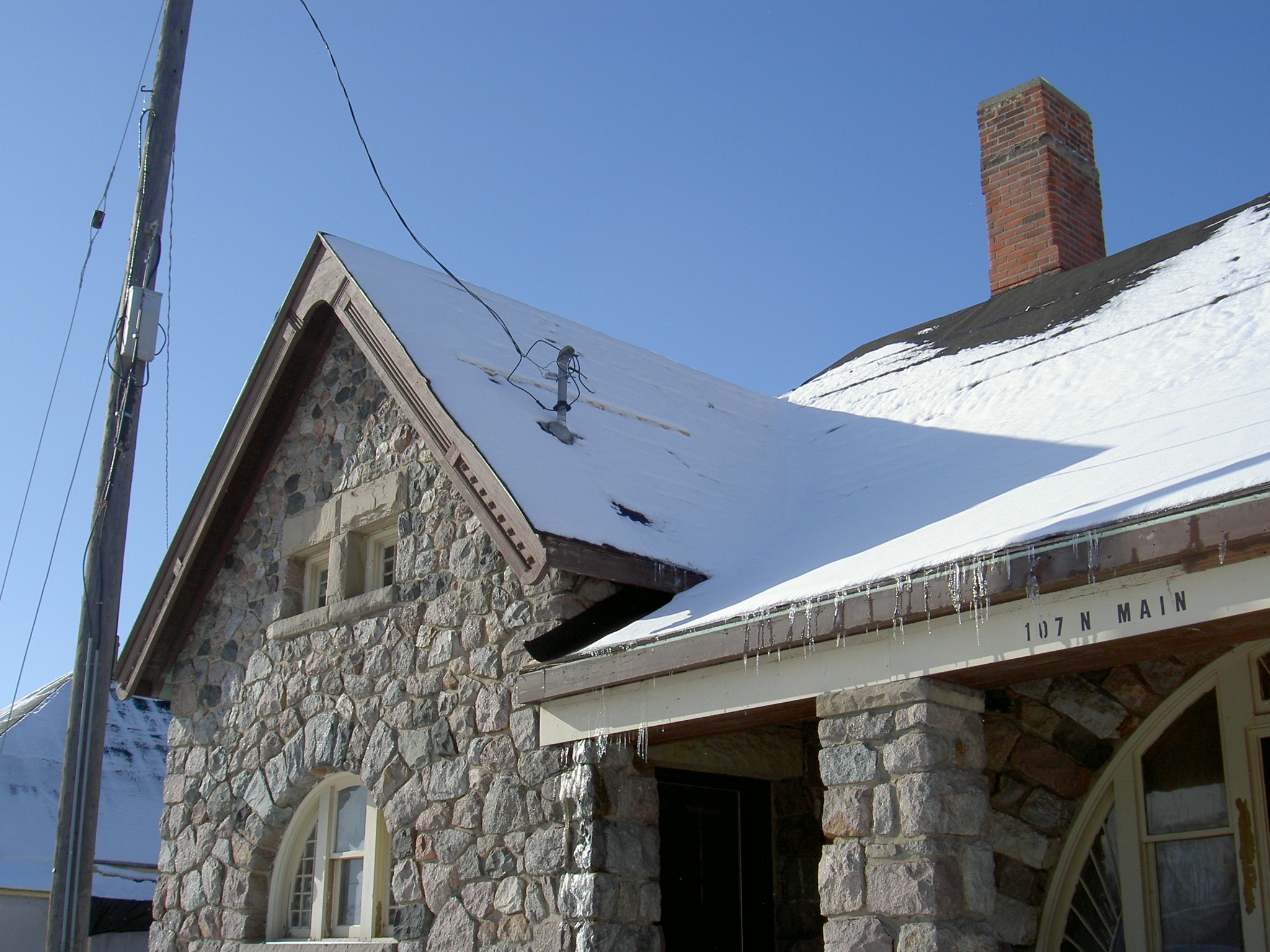 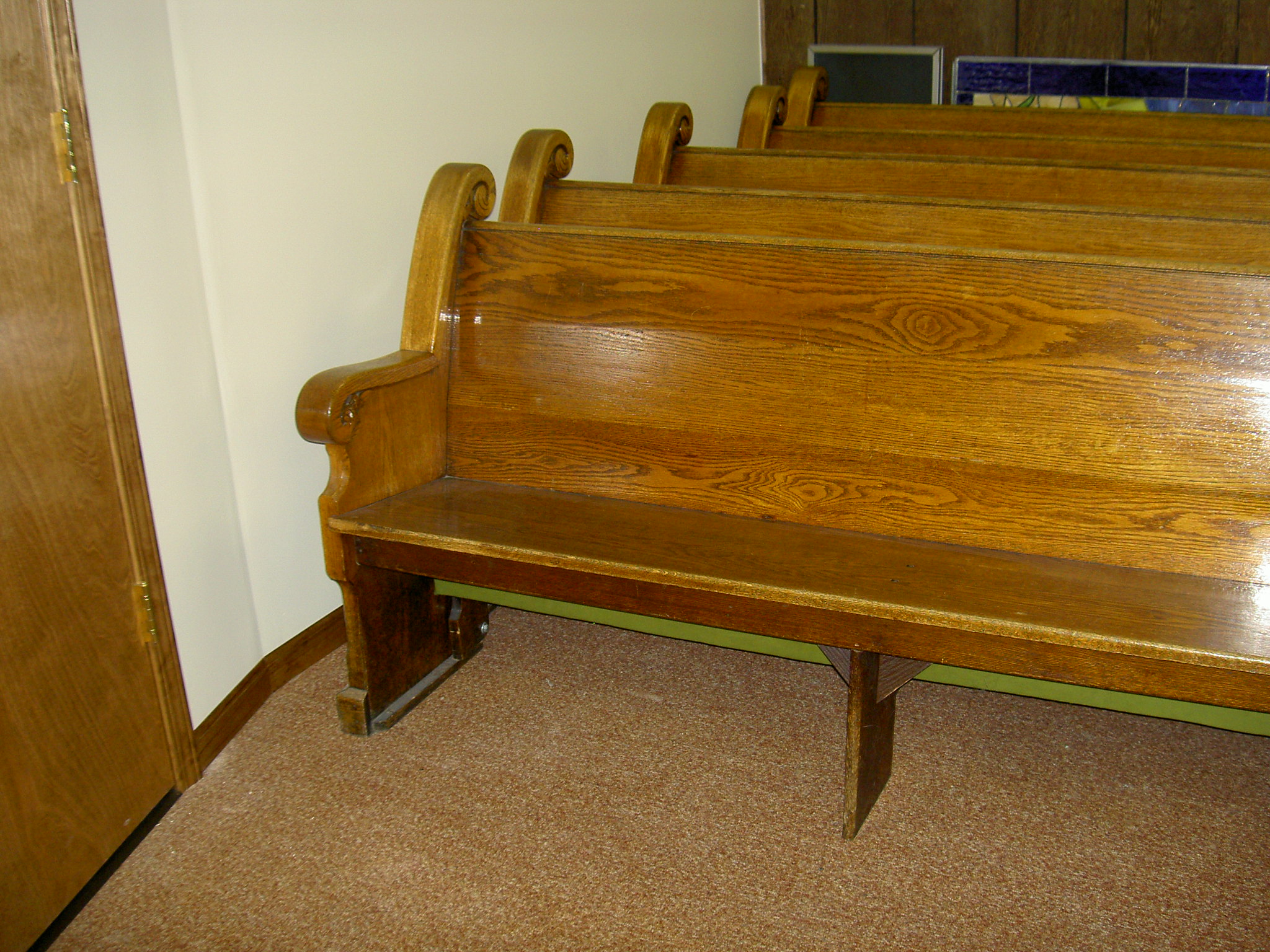 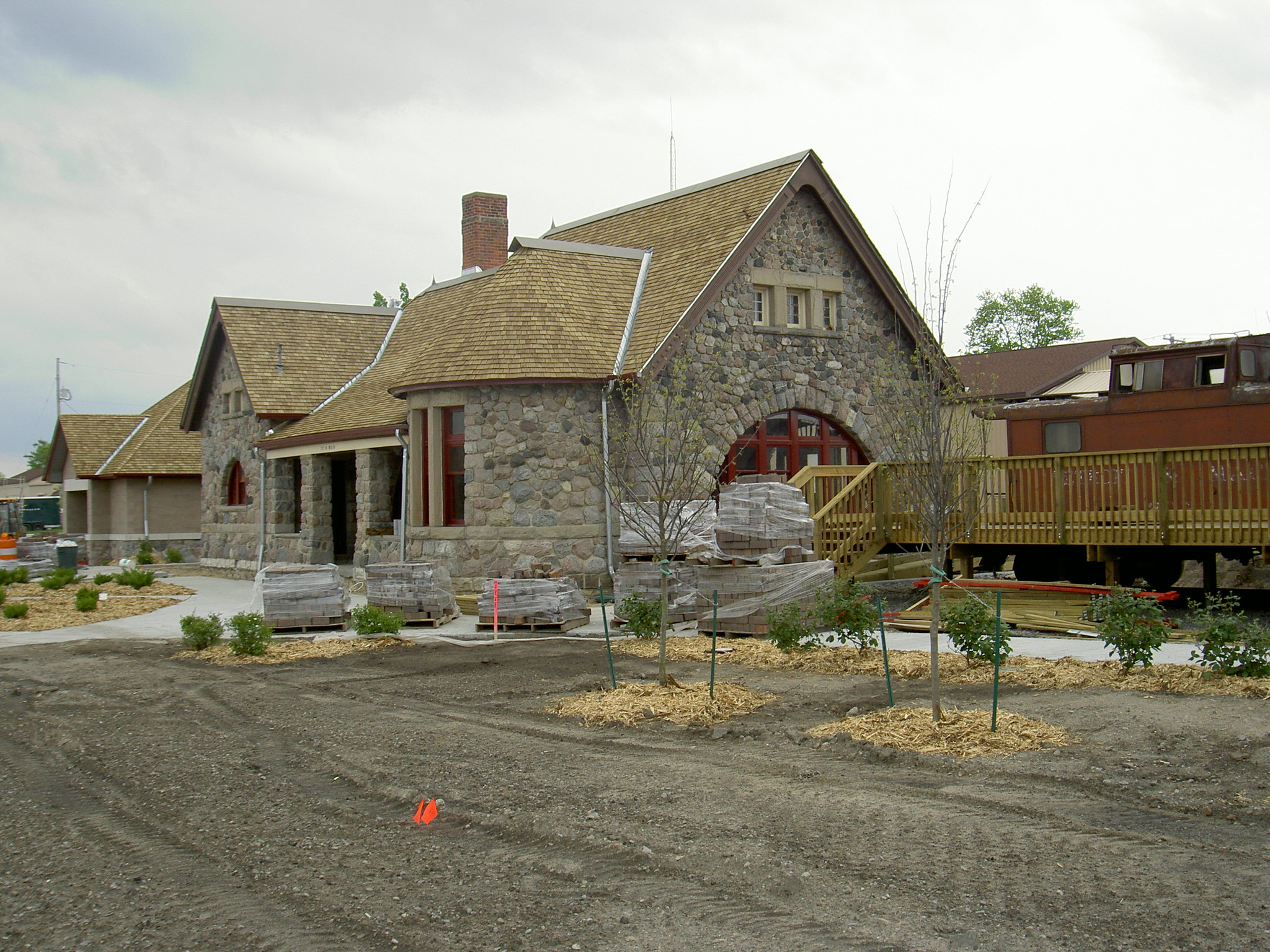 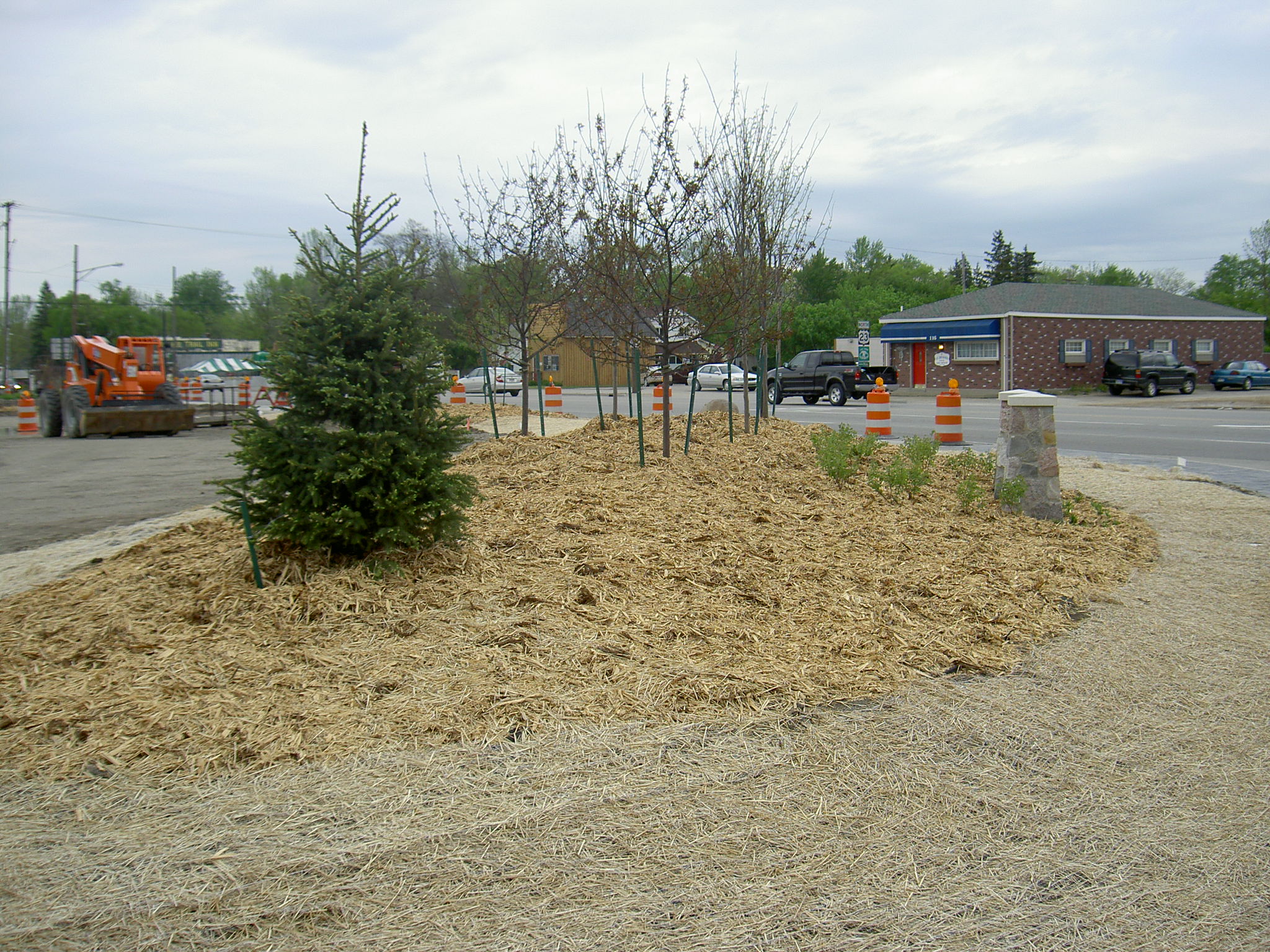 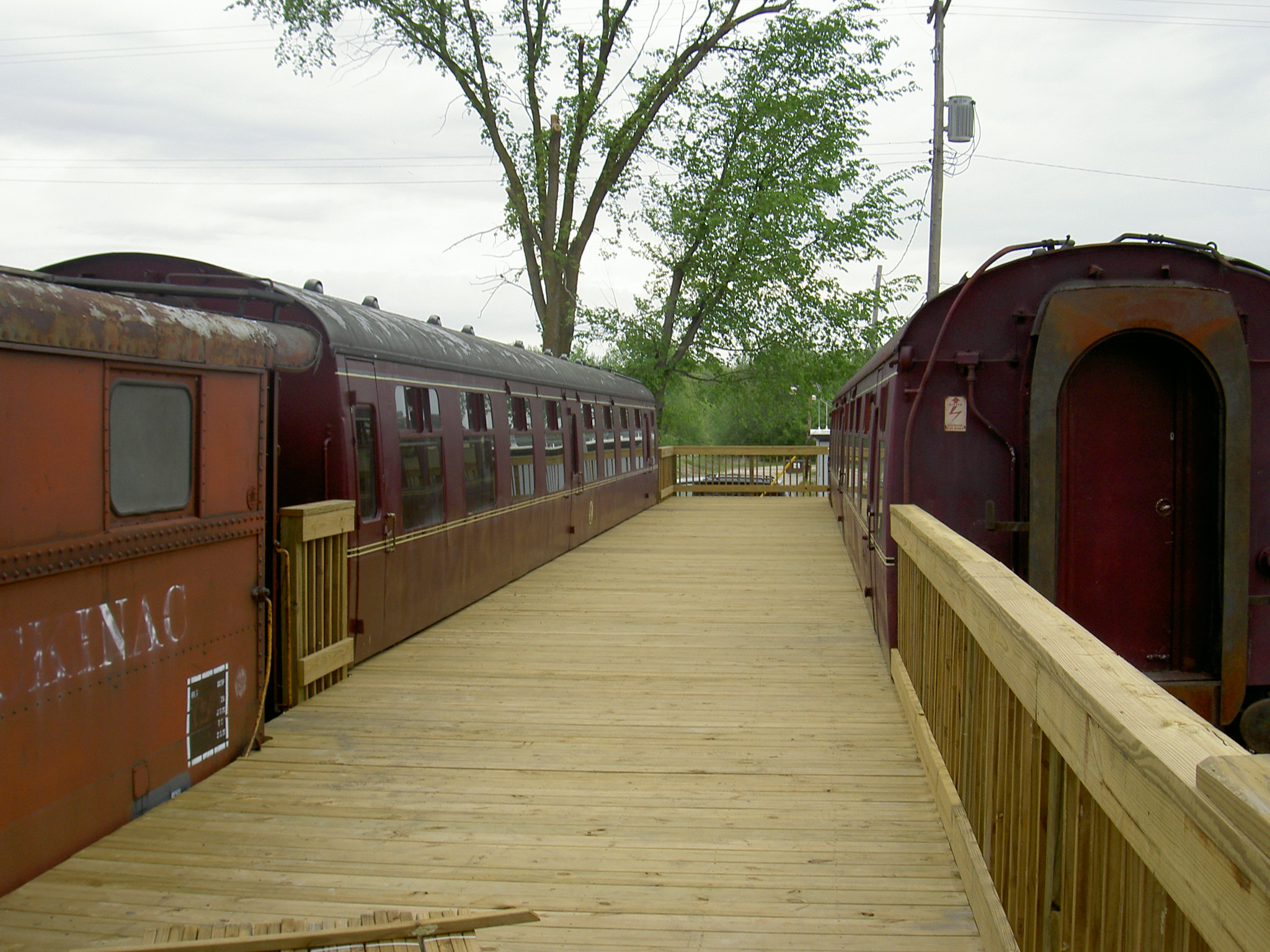 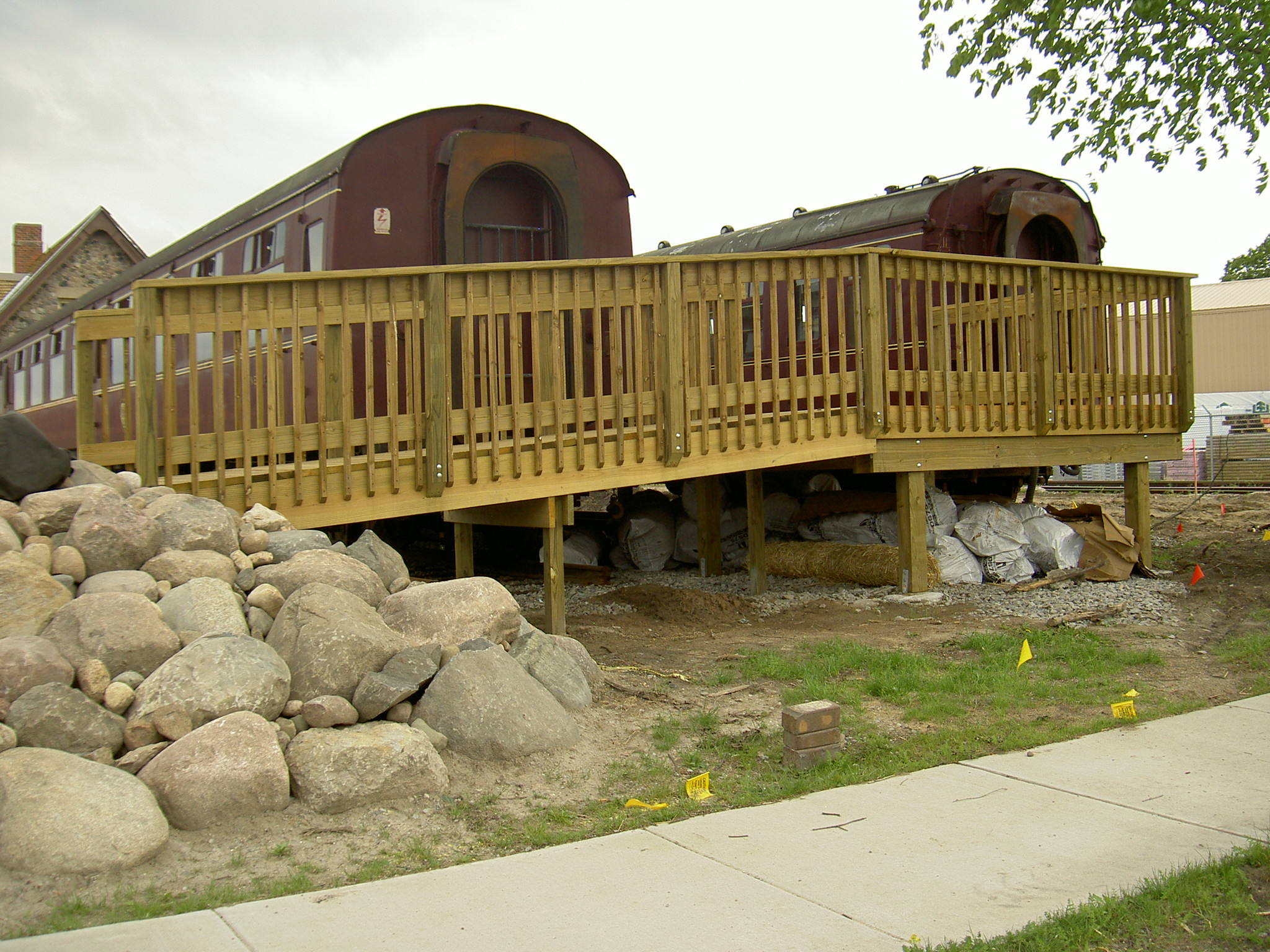 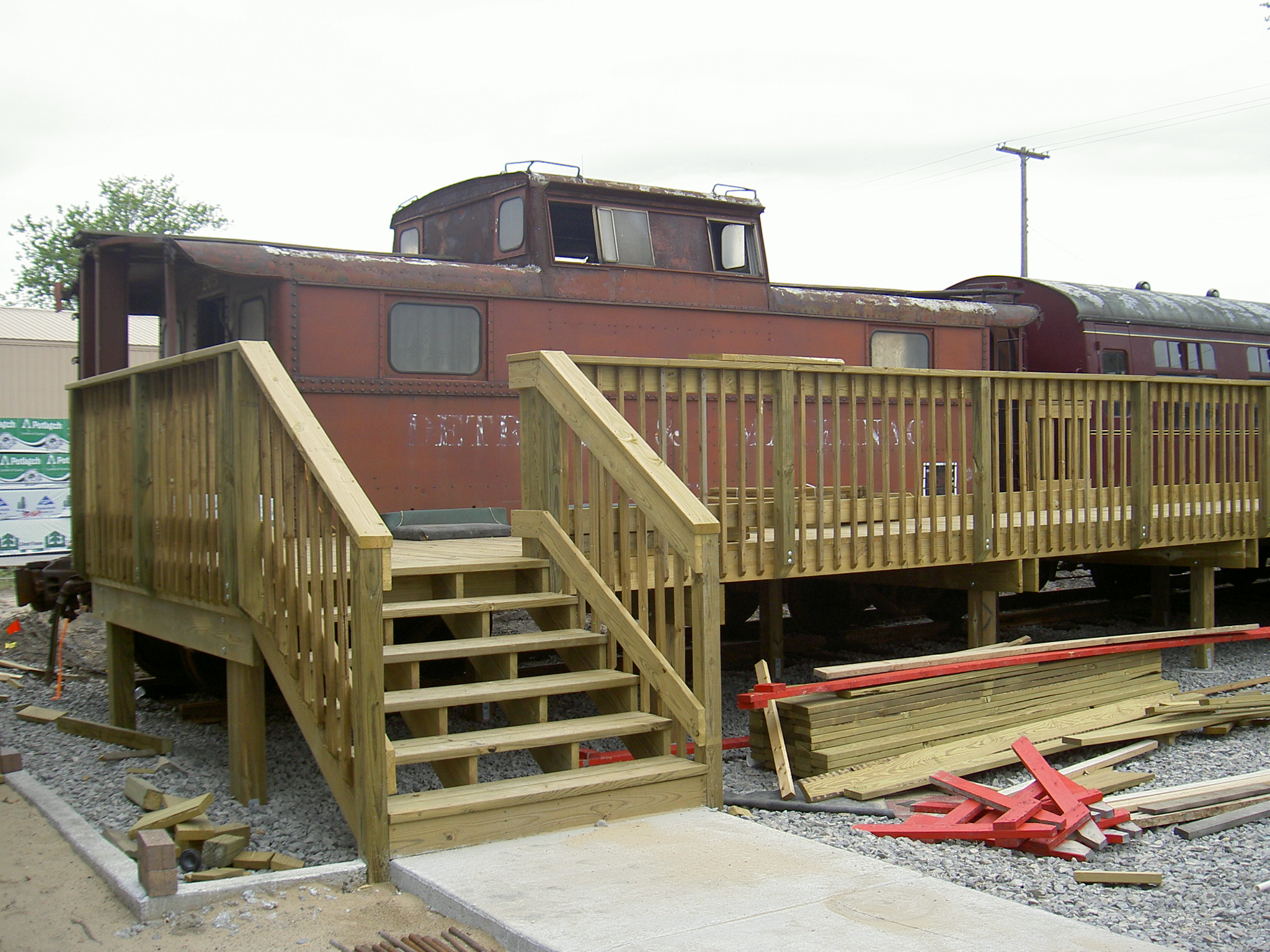